“Birdsongs: Sounds of the Mississippi Flyway” is a new compilation of original instrumental songs inspired, as the title suggests, by the bird sounds commonly found in Northern Illinois.

Each song begins with an audio sample of a bird’s actual call – obtained from the Cornell Lab of Ornithology – followed by a rendition by Rockford musician Micky Torpedowho was commissioned by the Sinnissippi Audubon chapter to create the album. The violin, piano and banjo dominate, to give the collection an “earthly” quality.

“They’re sort of love songs for the species,” Torpedo said.

Some of the songs came together quickly, he said. “The Baltimore Oriole was written in 10 minutes. I immediately heard the tonal center, the pitch, the melody the rhythm of what the (oriole) was giving.

But the bobolink almost broke it.

As the songbirds leave, the Bobolink‘s voice is an acquired taste, a flurry of high-pitched, metallic squeals that are more reminiscent of R2-D2 than the melodic trills of operatic wood thrush by comparison.

When he first heard Cornell’s recording, Torpedo thought, “Oh man, this is gonna get cut,” he recalled. “My goal was to stay as close to the species as possible, but to make it palatable and interesting. With Bobolink, if I was specific with the pitch, I don’t know if people would listen.

Once he locked in a triplet move into the Bobolink chirps, however, Torpedo was able to tease a melody. The result is an understated yet melodious piano piece that captures the essence of bobolink birdsong without sacrificing people’s ears.

This May, award-winning producer To post – best known for collaborating on Wes Anderson films – dropped out”For the birdsthe first in a planned five-volume set of music and poems inspired by birdsong. The set includes contributors like Elvis Costello, Wilco, and Arcade Fire, who provided songs, and Hollywood personalities like Robert Pattinson, Natasha Lyonne, Regina King, and Matthew McConaughey, who provided narration. Sales will benefit National Audubon.

Sinnissippi Audubon Chapter leader Jennifer Kuroda was unaware of Poster’s project when she approached Torpedo with her idea for a “Mississippi Flyway”.

Although Sinnissippi’s homegrown effort may lack the star power of Poster — Torpedo has no manager, let alone a publicist — both recordings tap into a renewed interest in birds, one born largely from the various lockdowns and restrictions of the COVID-19 pandemic. People were spending more time in nature, slowing down, watching and listening. Much of what they saw and heard were birds.

“It’s a healthy way to find peace in our lives, just stopping for 10 to 15 minutes to listen to the birds,” said Torpedo, who counts himself among the new converts.

Suddenly, birdwatching, a hobby once considered just cheesy has become so cheesy-it’s-cool.

But for beginners, birdwatching can be daunting, she acknowledged. It’s up to experienced amateurs like her, she said, to make newcomers feel welcome, whether by sharing binoculars or creating accessible entry points like Sinnissippi’s. peregrine falcon nest camera or this album of birdsong.

“I want to encourage more people to come out,” Kuroda said.

Yet, just as people are discovering the charm and beauty of birds, the creatures themselves are suffering from a steep decline in population and species diversity.

There is, for example, a long-standing bird banding station in Durand, Illinois, Kuroda said, where the downward trend in the number of banded birds is evident. “I think how amazing it would have been to see these huge herds” that no longer exist, she said.

To raise awareness of the need for conservation, the birds chosen by Kuroda for “Mississippi Flywary” are all threatened or endangered.

“I really wanted to make that connection,” she said. “These birds in our state, like the bobolink, have been impacted because of climate change and habitat destruction.”

It’s a problem that has hit close to home for Kuroda.

Sinnissippi Audubon was one of the organizations involved in the first fight to save the old Bell Bowl Prairie from demolition, to make way for a planned expansion at Rockford Airport. Birdwatchers were the first to sound the alarm that bulldozers were at the edge of the meadow.

Bell Bowl has always been part of Sinnissippi’s annual spring bird count, Kuroda said, and was known as a great place to spot a kestrel or northern shrike. His last visit to the prairie was in the fall of 2021, after attending a contentious airport board meeting. She walked to Bell Bowl with a group that included Jack White, the former director of the Illinois Natural Areas Inventory.

“We were there for an hour. That’s probably why they put the security in place,” Kuroda said. “I wish everyone had had the same opportunity to be there with Jack. He knelt down with that glass eyepiece and pointed to that square and said, ‘There are 40 species of plants. “It’s more diverse than a rainforest. I was almost crying, it was very emotional. You realize what’s going to be lost.” 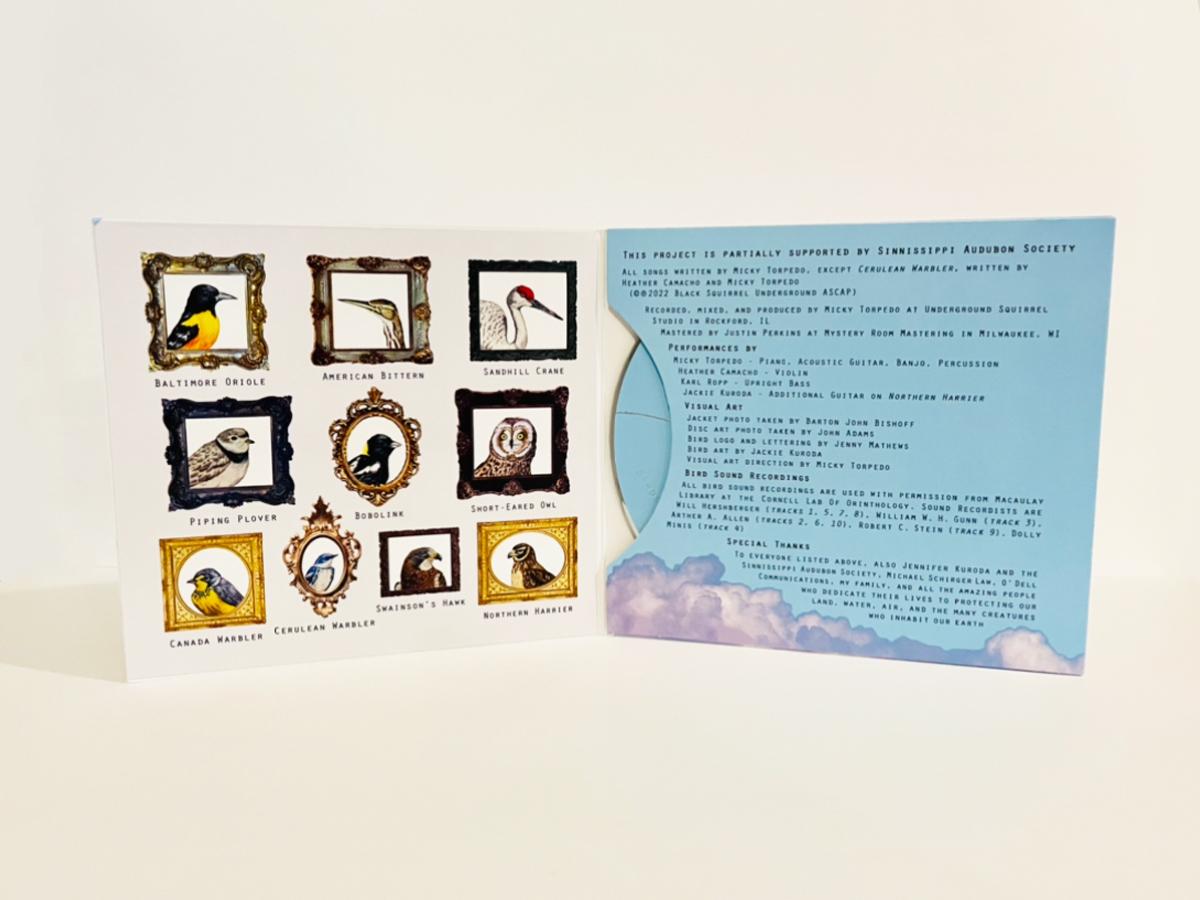 “Birdsongs: Sounds of the Mississippi Flyway” is available as a digital download, but there is also a physical CD. (Courtesy of Micky Torpedo)

While it would be amazing to replicate the success of Australia’s Birdsong Project, Torpedo’s goals are much more modest. He would like to cover his costs and be able to donate a portion of the proceeds to Sinnissippi Audubon to fund ongoing outreach and education.

Although the tunes may be digitally downloadedTorpedo is particularly fond of Old-school CD he created for purchase (with artwork designed by Kuroda’s daughter, Jackie), which comes with a bonus set of trading cards, one for each bird included in the album.

Well, technically no trading cards, since everyone gets the exact same deck, Torpedo said. For this, he will have to record additional volumes of birdsong.