Stryper’s singer / guitarist Michael Sweet took to social media earlier today with the following update on what will be his band’s 14th studio album, due in 2022.

“I’m happy to say that all the songs (music) on Stryper’s new album are done. I started working on everything 2 weeks after my eye surgery (once I could look up) so that took a little longer than usual (3 weeks) and also due to the holidays.

Of course, we’ll tweak them once we’re together for rehearsal. Usually we rehearse at my house, then head to Spirithouse to record. This time around we’ll rehearse at Spirithouse and work on a few songs at a time and then follow them up once the band learns them. Very different but most likely very effective. “

“What are the songs like? Killer! Lots of riffs, grooves, up tempo and mid tempo and everything has a great feel. I only sent music to the guys so they haven’t heard any melodies yet but the melodies are loud and powerful. It’s always a bit strange to talk about your own music but I can say I’m really excited about the direction of this album! I know you will be too.

We set the D to make the setting sound a bit bigger and heavier. There are a few songs with the low E string down another step (C), so these songs also have a little more meat and potato.

There are a few ballads but these are not your typical “piano” or “acoustic” ballads. They are also heavy and definitely guided by the guitar. Even though there were some obstacles along the way, this album really took the form of amazing work. We’re far away but man I can’t wait for you all to hear that !! This may be our best at the moment. 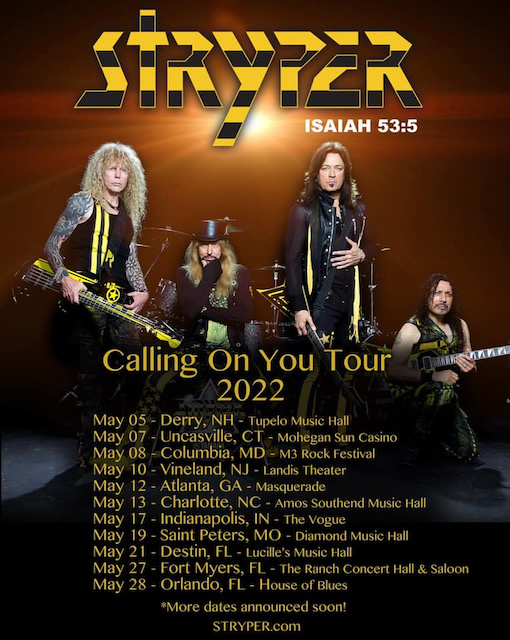 In the live news, Stryper announced a series of US tour dates in May. A message from the group follows …

“We’re so excited to be touring again. We’ll be touring a lot in 2022 and hope to see you all. Which venue should we go to in your city? Here are our first tour dates. More to come, but if you will. live near one of these towns, grab your tickets now I love you all and look forward to seeing you in person next year.